A fault arose with my phone line in February this year (2011), resulting in my wife and I being without a home phone and cut off from the Internet for about a week. Telstra provided us with a free service that forwarded incoming calls to our mobile phone. We were charged full price for our line rental.

The same fault presented itself in March, this time taking over two weeks to get fixed. Again they promised to provide a free call forwarding service to my mobile phone and, as compensation for both faults, they gave us a twenty dollar discount on our line rental. However, when we received our bill, although we had our $20.00 discount, we had been charged $16.60 for calls that were forwarded to our mobile phone, a service which was supposed to be free.

I spoke with two of the contractors that arrived at my home at different times to check out the problem and they told me that a cable had been accidentally dug up and re-buried by a back-hoe operator in a new estate being constructed nearby. They also told me of a 200 meter length of Telstra cable had been strung across a public park on Kirkwood Rd, on top of the ground. They said that this above-ground length of cable is the source of my problem. I was told by Telstra and one of the contractors that came to my house that the damage done to the cable was too great to be repaired by local contractors and that they would have to send a specialised team to repair it properly.

The fault returned again and I reported it on the 28th of April. Telstra told me that someone would be around to have a look at the fault on the 4th of May. They contacted me again to extend that date to the 6th of May. No-one came and I was still without a home phone. I spoke with Telstra on the 9th of May and they gave me yet another date - the 16th of May - making it three weeks without a home phone or Internet access. On the 14th of May I got a txt from the contractors that were working on it, advising that my phone had been reconnected. My ADSL was still down but after a quick call to my ISP, we managed to get my Internet connection working.

Internet access at our house is our primary means of communication. We use Facebook and Skype to keep in touch with family and friends across Australia and around the world. Our bills are now sent by e-mail so they don’t have to be printed on paper and we use online banking to pay them. We get our news and weather online. My wife maintains a YouTube channel and I have this blog. Being cut off from the Internet causes us far more inconvenience than losing access to our telephone service. We pay $69.99 per month to TPG Internet for ADSL which we are unable to access while we have this fault on our Telstra phone line. Because we are not using Telstra’s own Internet company, BigPond, no-one at Telstra wanted to know anything about the money we’ve paid for our Internet access - access that has been cut off to us from by this fault.

I was getting pretty annoyed with Telstra by this time and they must've realised it because they assigned me a case manager. My case manager has been very polite and he's tried to be as helpful as the bureaucracy he works for will allow. It's interesting to note that once Telstra has assigned a case manager to you, no-one else at Telstra can deal with you. It's certainly better than talking to a different person every time you ring them up, but when I rang up one day and he wasn't there, I was told that I would have to wait until he got back to work to discuss my problem. Even when I asked to be put though to "someone who is being payed enough to be yelled at", she told me that the only person I can be transferred to is my case manager, and as he's not at work there's no-one I can talk to. When I did get a hold of him, my case manager was very keen to help out. He fixed the overcharging on my bill and in a bit of a win for us, he even gave us a payment to cover the month of Internet we lost.

I went with a mate to find this cable strung across the park. It didn't take long so we snapped a few photos. I couldn't believe what we found. I had been offline and without a home phone for about a cumulative six weeks this year. I had been told on more than one occasion that a special team from Telstra was going to fix the fault because the job was too big for their local contractors. This last fault took three weeks to get fixed. These photos were taken the day after I got the 'repairs complete' message. While talking with my case manager, I offered to send him the photos so he could see for himself why I'm so unhappy with the results of the repairs. He told me that due to privacy concerns he could not give me an e-mail address to send them to, so I'm posting them online here. 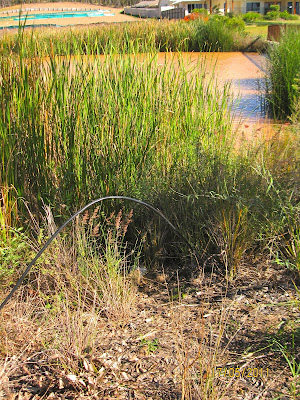 The cable comes out of the ground at the edge of a pond beside a bridge amongst some swampy reeds. 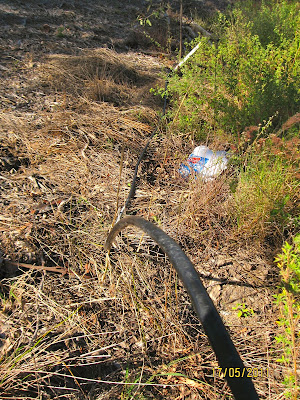 It is strung along the top of the ground through a garden beside a path in the park. 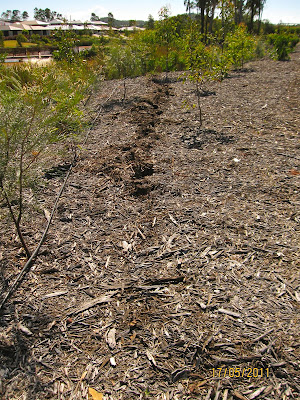 It looks as though someone has pulled it up from a shallow covering in the garden bed. 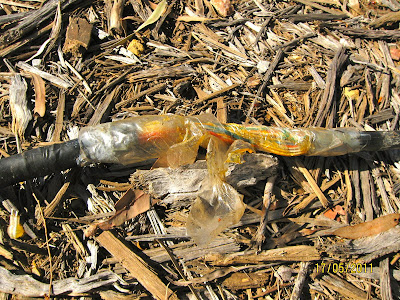 Example one of damage to the cable. 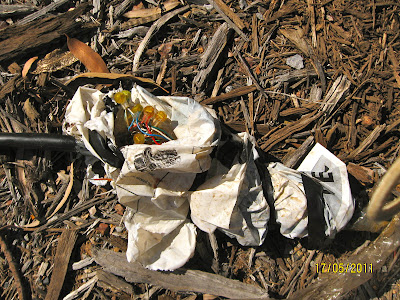 Example two of damage to the cable. 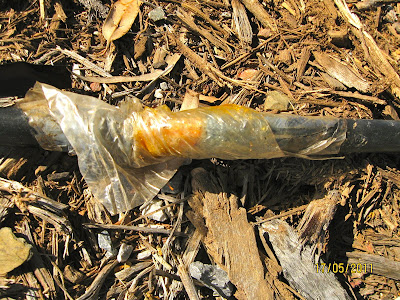 Example three of damage to the cable. 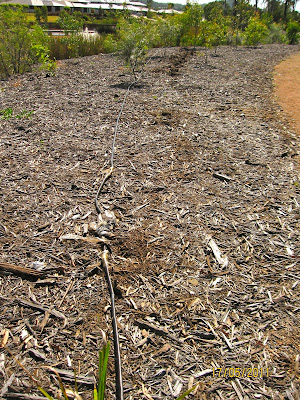 This shot shows the three damaged sections together. On the right side of the photo you can see the well-used exercise path that runs through the park. 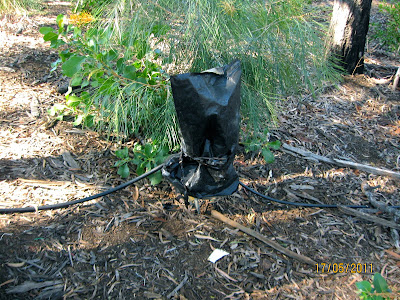 This is probably example four of damage to the cable. It's a black plastic bag held on by a couple of wraps of electrical tape. The cable goes in one side and out the other. 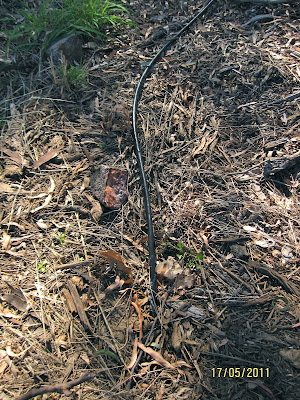 About 200m from where it comes out, it disappears back into the ground.

After taking these photos, I have to wonder... which one of these plastic-bag and sticky-tape repairs took three weeks to complete?

I get the feeling I've been lied to. More than once.

I would really like someone from Telstra to explain to me:- If the repairs are just some plastic bags and electrical tape, why did it take three weeks to get my phone back on? If a specialised team of Telstra technicians was here to do the job - as I was told would be the case - how could they just leave a cable that supplies phone and Internet to me and my neighbours, sitting on top of the ground next to a path in a public park?
at Thursday, May 19, 2011

Well ok well the repairs do look very temporary. I think the way they see it is well someone went and stuffed it that many times fixing it will be pointless. As whoever did it will return to do it again. One cut yeah no real malice but you counted 4?
Would have been better that you had before calling them out and after pictures though.

So you would be better sending a postal complaint. print out the pictures and send them to it that way.

Adding them my list of Evil Corporations. It shall be number two. Number one, is of course Monsanto.